Troupe gauging if audiences will return

By Diana Nollen, The Gazette AMANA — “Buddy: The Buddy Holly Story” played for one weekend on the Old Creamery Theatre stage in March 2020, before the COVID-19 pandemic shuttered the show. The rest of the 2020 season was suspended May 11.

The professional troupe, founded in Garrison in 1971 and headquartered in Amana since 1988, rallied with several outdoor and virtual offerings, as well as two virtual cabarets to benefit several area theater troupes.

But board President Peter Teahen, 68, of Robins, said the income wasn’t enough to cover the organization’s operating costs, including $20,000 per month in salaries for the professional staff. So when the Paycheck Protection Program funds ran out June 30, the board voted to terminate 10 staff members, retaining general manager Pat Wagner to handle day-to-day operations during the closure.

That action touched off a firestorm of criticism, with staff members asserting the online posting of a Black Lives Matter statement led to the firings. The most definitive action plan among area theaters, it called for policy and programming changes and creating a scholarship fund to remove employment barriers for students, interns and young artists.

The statement was posted online June 10, 2020, but the plans hadn’t been vetted with the board. Shortly thereafter, the staff was told to remove it.

“Any time you’re making policy or having discussions of direction of an organization, it’s appropriate to have (the) management team involved in those discussions,” Teahen told The Gazette at the time. And in mid-July 2020, the board prepared its own statement committing to diversity, inclusion and equity.

Teahen maintained the decision to close the theater’s doors, suspend outdoor and online programming and terminate the staff was driven by financial circumstances. With revenue losses, the theater already was facing a deficit of $150,000, he said. The closure was indefinite, but he said the board was committed to reopening when it’s safe to do so, and was looking forward to celebrating the company’s 50th anniversary in 2021.

The Old Creamery’s official anniversary celebration is being postponed until the 2022 season, and the search for a new performance space, launched before the pandemic, is on hold.

This fall, however, the doors to the Amana theater at 39 38th Ave. are inching open with road show offerings, beginning with a Red Skelton tribute at 7:30 p.m. Sept. 17.

The shows are explained on the theater’s website, oldcreamery. com, but since the box office is closed and changes are coming to the website, tickets are available only by phone at (319) 622-6034.

The first show is “a measuring stick” for the willingness of audiences to return to indoor shows, Teahen said, especially with the current uptick in COVID-19 and the delta variant pushing the entire state into the red zone of high virus transmission.

“How does that impact the client who wants to come and see a show? So we’re testing this and saying, ‘OK, let’s see if people will come.’ We’re getting good indications at this point. More than half of the performance is sold, which is positive,” he said Sept. 1.

“We’re very optimistic that this is the right decision — to take it step by step and protect our audience and protect what’s left of the resources of the theater at this point.”

Even with staff reduced to just the general manager, everyday operation costs have been running about $12,000 per month, Teahen noted, which is stretching the theater’s resources after 18 months with no income.

The Old Creamery has received a $437,843 Shuttered Venue Operators Grant, a federal program designed to help cultural institutions recoup their losses from COVID-19 shutdowns. The funds can be used for such everyday expenses as payroll; rent, utilities, mortgage and debt payments; worker protection expenses; insurance; administrative costs; state and local taxes; and a portion of the cost for producing live events.

Teahen is hoping the rules will be modified so the funds can roll over to the spring, when the board hopes to mount a production season again.

“I don’t know if (the operation) will be the same as what we had in the past,” he said, with a production staff and professional resident- and contract players. “I would imagine we will have a lot of those positions. I think it’s where we do all the exact same things we’ve done the last couple years, or will we be like a lot of businesses and say, ‘Here’s a chance to do something different.’ “We want to maintain the quality and the character and the integrity of what we’re doing,” he said. “But how do you get back in the post-COVID environment? How willing are schools going to be for us to come back in and do the programming … like we’ve been doing? We went to a lot of schools in a lot of cities. As far as I know … they’ve pretty much got the schools locked down and they’re just not letting people come in for much of anything. When do we recover from all that? … “I think redesigning and reshaping any program can be exciting to see what really worked before, and what can we do now, with a different emphasis on different things. It’s somewhat exciting when you take a look at the future and what’s possible.” 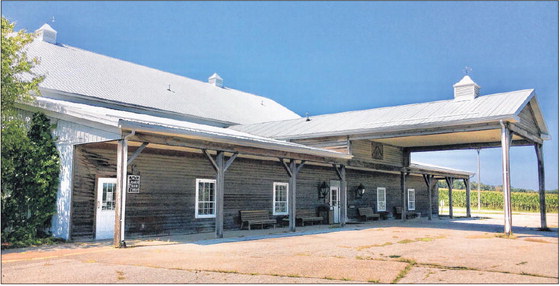 The Old Creamery Theatre building in Amana, shuttered to the public during the pandemic, is reopening its doors this fall to bring in touring road shows. 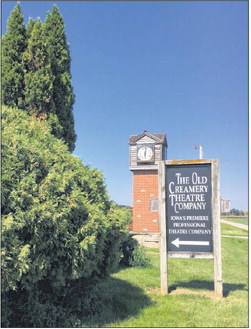 This clock tower and sign, as seen Sept. 5, point to the Old Creamery Theatre in Amana. The venue has been closed to the public since mid-March 2020, and is reopening for a series of road shows this fall. The first is a tribute to Red Skelton on Sept. 17. Three other productions will follow in October and December. (Diana Nollen photos/The Gazette)

Click here to see this page in the eEdition: